Now, when I say that CVD is complicated, I suppose I mean it. Here is a slide that I have been pondering for a couple of weeks. It comes from a paper called ‘DDAH Says NO to ADMA.’1 And that gets my official ‘acronym title of the year award’. Something that I do not hand out lightly. Here is the key diagram from the paper. 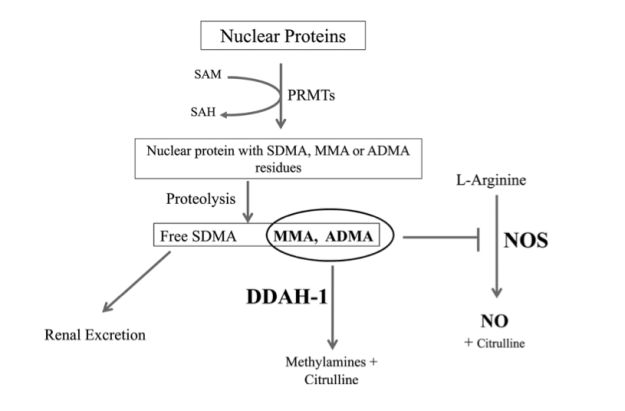 Actually, it is not that complicated, because it is explained thus. ‘The role of DDAH1 in the metabolism of the NOS antagonists ADMA and MMA. DMA indicates dimethylamine; PRMTs, protein arginine methyltransferases; SAM, S-adenosyl-L-methionine; SAH, S-adenosyl-L-homocysteine; SDMA, symmetrical dimethylarginine.’ That should have cleared everything up, I hope.

Joking aside. For those paying attention, and I must admit you will have to have a pretty good memory here, I did mention some time ago that PPIs increased the risk of CVD. PPIs are proton pump inhibitors such as omeprazole, lansoprazole, esomeprazole, pantoprazole and suchlike. If you take medicine to prevent stomach ulcers, or gastric reflux, and it ends in ‘zole’ it is a PPI. [Which, if you live in the UK, is not payment protection insurance, which banks mis-sold and are now paying billions in compensation].

The reason why I was pondering DDAH and AMDA is that, very recently, I was sent a paper which had the following results:

‘In multiple data sources, we found gastroesophageal reflux disease (GERD) patients exposed to PPIs to have a 1.16 fold increased association (95% CI 1.09–1.24) with myocardial infarction (MI). Survival analysis in a prospective cohort found a two-fold (HR = 2.00; 95% CI 1.07–3.78; P = 0.031) increase in association with cardiovascular mortality. We found that this association exists regardless of clopidogrel use. We also found that H2 blockers, an alternate treatment for GERD, were not associated with increased cardiovascular risk; had they been in place, such pharmacovigilance algorithms could have flagged this risk as early as the year 2000.’2

Now, I already knew that PPIs increased the risk of CVD, but the risk seemed relatively small. However, the problem appears to be far worse that I thought. A two fold risk of dying of cardiovascular disease is worrying. Especially as these drugs are prescribed to millions of, mainly, elderly patients. Where the risk of CVD is already high.

For example. In England, in 2014, there were fifty three million prescriptions written for PPIs. This equates to around four million people taking PPIs every year. Almost all of them on long term treatment [The way the figures are presented makes it difficult to establish how many people actually take PPIs. Many prescriptions are written monthly, but not all. So I divided fifty three by twelve and rounded up a bit, then took a few again, because some prescriptions are two monthly – and not everyone takes them long term]

Run the figures a bit further, and the true scale of the problem emerges. Most people taking PPI are elderly, where the risk of death from CVD is pretty high, but I am going to use the average UK death rate of 150/100,000 per year from CVD [men and women combined]. So my figures are likely going to be a considerable underestimate.

Anyway, we now have a simple equation

Which, for those of you who like such things, is the population of Grantham, the 244th largest town in the UK. Even if you don’t like such things, 42,000 excess deaths a year (rest of the world excluded) seems a big enough figure to do something about. My prediction – nothing at all will happen. When you have a problem as big and scary as this, nothing ever does.

Leaving this issue aside I was interested to find out, why do PPIs have this effect? Well, it is well known that they lower magnesium levels and sodium levels, which is not a good thing. They also seriously inhibit vitamin B12 absorption – leading to Vit B12 deficiency in many.

In my medical role, I have seen around twenty patients with such severe low sodium (hyponatraemia) due to PPIs, that they were diagnosed with delirium and required hospital admission. Which means that I have become increasingly wary of PPIs, and try to prescribe alternatives wherever possible.

That though, is an aside, as the adverse effects I mentioned do not increase CVD risk. So the question remains. How, exactly, do PPIs cause such a significant increase in CVD death? They do not raise blood pressure or blood cholesterol – or affect any of the traditional/mainstream risk factors for CVD

They do, however, have an effect on platelet aggregation. By which I mean thaty make platelets more likely to stick together – and thus start blood clotting. But this does not seem to the main mechanism at work here [although it does fit very nicely within the hypothesis that CVD is due to blood clotting abnormalities]. To quote the paper that found the increase in CVD risk with PPIs again:

‘Our observation that PPI usage is associated with harm in the general population—including the young and those taking no antiplatelet agent—suggests that PPIs may promote risk via an unknown mechanism that does not directly involve platelet aggregation.’2

If not platelet aggregation, then what? As it turns out, the mechanism by which they increase the risk of CVD is intriguing, and it all comes down to Nitric Oxide (NO). My favorite molecule. The explanation from the paper is, as follows. Again, there is much jargon here:

‘An alternative explanation is that the observed risk of PPIs is due to some unknown mechanistic pathway and that this pathway may not be restricted to vasculopathic patients (patients at high CVD risk – my words). In this regard, we recently reported that PPIs inhibit the enzymatic activity of dimethylarginine dimethylaminohydrolase (DDAH), which is responsible for 80% of the clearance of asymmetricdimethylarginine (ADMA)—an endogenous molecule known to inhibit the enzymaticactivity of nitric oxide synthase (NOS). An impairment in endothelial NOS (eNOS) is wellknown to increase vascular resistance, and promote inflammation and thrombosis. ADMA is a potent disease marker and independent predictor of MACE in prior observational studies. Our recent pre-clinical studies found that PPIs increase ADMA levels in human endothelial cells and in mice by about 20–30%.’

To rearrange this jargon as simply as I am able.

In truth, I do love this stuff, when the underlying process is made clear. Perhaps that makes me Mr Supergeek 2016, but I don’t care. When I see a paper with the heading DDAH says NO to ADMA I know I am going to enjoy it. It brings together a number of strands that, when you know what you are looking for, all make sense. It reconfirms my belief that if you are going to understand a disease, you absolutely must – and I mean absolutely must – try to understand the underlying process. Or else you are just floundering about.

Once you have done this, if your underlying hypothesis is correct, then everything should fit together effortlessly. As readers of this blog know, I believe that CVD is primarily due to

Which means that, when someone sends me a paper highlighting the fact that PPIs double the risk of cardiovascular death I immediately think. Does this fit into the processes above, or is it a contradiction? I hope that I can share some of the pleasure it gives me when a perfect confirmatory process emerges.

As it turns out, PPIs inhibit NO production, through a biochemical system that is well known, and has been clearly established. NO is probably the vital molecule in heart health. It protects the endothelium, it prevents blood clots, it stimulates the production of endothelial progenitor cells. Therefore, anything that damages NO synthesis will – inevitably – increase the risk of CVD.

I like to think, at moments such as this, that I get to feel a little of how Mozart must have felt whilst composing, or Einstein whilst thinking, or Michelangelo whilst sculpting. A moment of utter perfection. Order from chaos. Bliss.

Of course, I am also aware that many people will still be thinking ‘OK, this is all very well, and all very theoretical, but how do I avoid a heart attack. Give me the damned information.’

Ladies and gentlemen, I like to think that I am giving you the information. If not in exactly the form that everyone wants it. However, I promise that I shall try to lay it all out shortly – as well as I am able.

However, I can give you no absolutes. I can only help you change the odds in your favour. I do not have perfect knowledge, even if I did, the human body is still too complex (and maybe always will be) to state that ‘If you do this you cannot have a stroke, or heart attack.’

After all, whist it is an incontrovertible fact that smoking causes lung cancer, yet you can smoke all you like and never get lung cancer. On the other hand, you can never smoke, and still get lung cancer. I am equally certain that you can do everything possible to avoid CVD and still die of a stroke or heart attack. Equally, you can do everything wrong and stay CVD event free. The Gods do like to play dice with us feeble humans.