If you are going to try and explain what causes cardiovascular disease (CVD) you need to study epidemiology. By which I mean, how many people die of heart disease and strokes in different countries, and communities. Also, what has been happening to CVD death rates over time.

You might think this would be relatively straightforward. If so, please think again. Then keep thinking again until your brain bursts. After that, start again. The reality is that there is almost no fact about CVD epidemiology that I have not seen challenged. Quite rightly challenged in many cases.

You might believe that when someone dies, it is pretty clear what they died of. Again, if you think that, please think again, and keep thinking until your brain bursts. You might further believe that that what is written on death certificates is an accurate record of cause of death… Ho ho.

Change your definitions, and codes, and you can cure the world of a disease – at the stroke of a pen.

Until 1948, not a single person died of Ischaemic Heart Disease (IHD), (IHD is what most people would call heart disease), anywhere in the world. Then, suddenly, millions were dying of IHD. IHD is a relatively broad diagnostic code, which incorporates myocardial infarction (MI).

What was the cause of this epidemic? Well, in 1948 the WHO decided that disease diagnoses ought to be standardised around the world, so that researchers would have some idea what they were actually looking at. So they created the International Classification of Disease (ICD). Which included IHD. And lo, an epidemic of IHD swept the world. Not, of course, in France, where they use their own diagnostic system – until 1968. A heart attack (MI) was called Cardiac Insufficience (I believe – I may be wrong on this exact terminology).

However, even after 1948, were people really diagnosing CVD/MI in the same way around the world. Were pathologists being accurate, or not. Were doctors simply writing the most likely cause of death on a death certificate, without having the slightest clue what the person actually died of? Who knows – for sure.

One thing I do know for sure is that, before 1948, you can forget looking at epidemiology for any answers, about anything to do with CVD. Now, you can argue this if you want, but I think the data are just too messy to rely on. In truth, you can probably forget anything before about 1960. Do you really think the entire worldwide medical community was suddenly diagnosing everything, in the same way, accurately, all of sudden, from 1948 onwards? If so, you need to go and lie down for a bit.

It was perhaps not until much later that a real effort was made to start ensuring that CVD diagnosis and deaths was actually standardised.:

‘The MONICA (Multinational MONItoring of trends and determinants in CArdiovascular disease) Project was established in the early 1980s in many Centres around the world to monitor trends in cardiovascular diseases, and to relate these to risk factor changes in the population over a ten year period. It was set up to explain the diverse trends in cardiovascular disease mortality which were observed from the 1970s onwards. There were total of 32 MONICA Collaborating Centres in 21 countries. The total population age 25-64 years monitored was ten million men and women. The ten year data collection was completed in the late 1990s, and the main results were published in the following years. The data are still being used for analysis.’ http://www.thl.fi/monica/

In case you were wondering, the other graphs: for women under sixty-five, and older men and women, have almost exactly the same shape. I must say, I love graphs like this. I can spend hours trying to work out what these figures mean. I also try to avoid jumping to conclusions (subtle hint to everyone reading this blog).

I also enjoy it when people claim that statins are responsible for the fall in CVD in the UK over the last twenty years. When were statins first introduced? About 1990 (ish). Although, of course, hardly anyone was taking them at first. Not until about the year 2000 did statin prescribing really take off. Look hard at that graph and see if you can see anything dramatic happening. A slight levelling off perhaps?

However, you are not going to learn a great deal just looking at one country. It is far more interesting, and useful, to compare and contrast. If we move from Western to Eastern Europe, the pattern over time is dramatically different. For example, in Lithuania, there is a very differently shaped graph indeed. 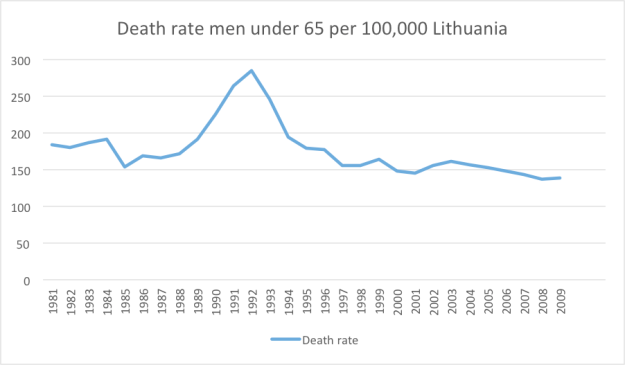 As you can see, in Lithuania, the figures are generally much higher, although it is still possible to discern a general downward trend over time. Obviously, however, there was a pretty dramatic blip that started in 1989. What could this be? Let me think? You know what, I think the Berlin wall fell in 1989, as did the entire Soviet Republic.

What then happened in Russia, you may ask. Of course the wall came down in 1989, but Gorbachov managed to remain in power until 1991, keeping things relatively stable within Russia itself. At which point he was overthrown by the rather more mercurial Boris Yeltsin.

As you can see from the graph, in 1992 the rate of death from CHD accelerated rapidly, then it fell, then it went up again in 1999. In 1999 Yeltsin resigned, or was pushed, and appointed Putin as his successor. [At which point, of course, Russia became a peaceful and stable democracy] 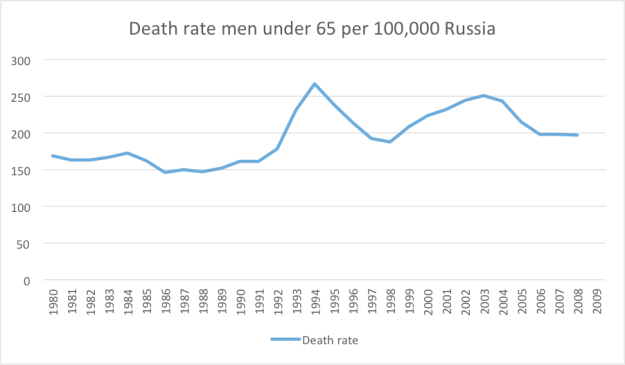 On the other hand, Russia was not immediately affected by the fall of the Berlin wall, at least not to the same extent as Lithuania. It was not until Gorbachev was overthrown by Yeltsin two years later, that all hell broke loose as the social structures totally fragmented. Russia has also gone through many more difficult changes since 1991 with continuing social upheaval, including wars with Chechnya, Georgia and the Ukraine.

Now you can, of course, explain these graphs in different ways. I am sure that people will choose their own favourite interpretation. Mine was, and is, that psychosocial stress/social upheaval is the single most important cause of death from CVD.

In the next instalement I will demonstrate how psychosocial stress links to the processes of endothelial damage and abnormal clot formation.